The AntiSocial Blog of Buraot 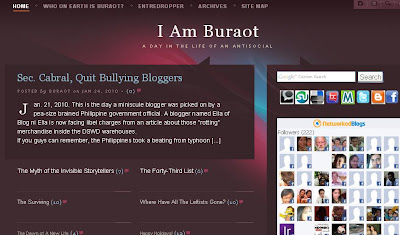 I became a follower of I am Buraot when his blog was posted as one of the Major sponsor of Kaye and Pehpot’s Blogversary contest. I was actually curious enough as to what does Buraot on his blog name means. When I saw his blog, I was really impressed on his articles written on his blog. I was also quite intrigued on the subtitle of his blog name which says: “A day in the life of an antisocial”.

I like his Wordpress blog template being used. It’s simple, its clean and its easy to navigate with. When I saw his blog overview, he said that he an quintessential skeptic but a not-yet-so-hopeless pessimist. He also said he is impatient most of the time and Buraot, the name itself he said it means an infinite folly of human stupidity. I could merely say, Buraot’s blog really reflects his own personality.

I had also known that Buraot is famous and generous being an Entrecard dropper that’s why I also grabbed his links and paste it my blog cause if you want your blog to generate more traffic and visitors, then be sure to add Buraot in your follower’s list.

If you want to get involved on our society’s issue, whether its socially or politically inclined where you can seek out some logic views and frank opinions, then I highly recommend this Antisocial blog of Buraot.