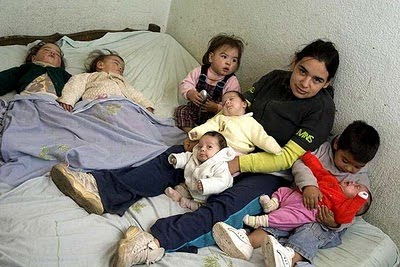 I was really shocked when I read this article about a 17 years old girl from Cordoba Province, northern Argentina who bore 7 kids in only 3 separate child births. Pamela Villaruel had his first son when she was 14 years old. The father of the kid refused the responsibilities and abandoned her.
Two years later she gave birth to her first triplets whose father was forced to leave the house for battering her. She and her kids were living in her parent’s living room and her parents help her raising the kids. Recently, she gave birth to another triplets whose father she refused to identify. Her mother Magdalena asked to perform ligation on Pamela to avoid another multiple births. But due to the young age, it is illegal and not allowed by Argentina laws.
I just can’t imagine how hard it is to raise 7 children at such a young age. Being a mom of one daughter, I had hard times balancing my time in managing my business, doing some household chores and taking care of her. It wasn’t a burden because it is my responsibility as a mother to raise my kid in a comfortable and decent way. But having seven kids is like 7 times the hardships. Pamela’s courage and commitment to raise these kids must be very strong. There are many women who would like to consider abortion but she was very passionate about her kids and raised them.
blogger Social Networking Site website