Vote Buying is Rampant Here in Our Place 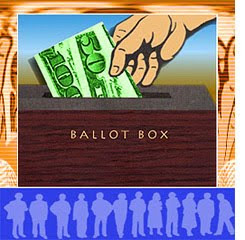 After our church service earlier, one of our fellow church member approached me and said she is endorsing her local candidate for congresswoman here in our city and said that this certain candidate is giving out P500 to every person who will vote for her for tomorrow's Philippine National Election.
Vote Buying is indeed very rampant here in our city. Some of my fellow church members and neighbors received the money so they could buy some foods and other needs but actually they will not vote for that candidate. I was not even excited to receive that money since I am voting for the right candidate who really helped us when we need help from them.
This congressional candidate that I am going to vote helped my brother in law and his wife where they availed a free scholarship grant and that includes their tuition fee from the whole semester of their course in college.When my mother-in-law was also admitted to the hospital, his Philhealth Card which is a privilege or discount card for the poor really helped us because we only paid half from the total hospital billings.
I would never buy my vote since I am standing for the right one who is more deserving to be on that position who is an honest person too.

My Life my life experiences