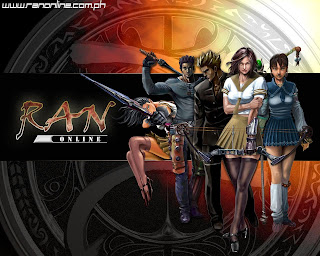 Ever since we had started our i-cafe business 6 years ago, my hubby has been addicted in playing online games. He is a fan player of RF Online and RAN online Philippines. He used to buy an e-card to top up and level up his ranking, skills and stats of his character. He also used to play the private servers of his favorite games but it doesn't last long since there has always been a problem and downfall of the servers that's why he went back in playing the Philippine servers. I don't have much knowledge on his games since I don't play it. However, I understand how to play the basics on it. Right now, he is hooked in playing RAN online.
RAN Online is the no. 1  campus-themed MMORPG (Massively Multiplayer Online Role-Playing Game) in the Philippines. Players join one of three competing schools and must battle members of the other universities along with evil beings found throughout the campuses. There are four classes to choose from, each with four skill types to master.
Since my hubby is the one who manage our i-cafe, I just let him play his favorite online games since it also serves as his past time while he serves as the attendant of our customers.
games play online website