Nostalgia # 7 - An Inspiring Life Story of my Sister-in-Law

For this week , I want to share to you this inspiring life story of my sister in law since she also serves as my inspiration and she helped me a lot in many ways specially in strengthening my spiritual life.
I remember how hard her life was way back when she was a single mother of her  four kids. She used to work as a clerk in the city hall but her salary was not enough to feed her kids and let some of them go to school. She used to chat online almost everyday and she did that for almost 2 years. She was striving hard to find the right man for her and finally, by God's grace, she had able to find her God's will. 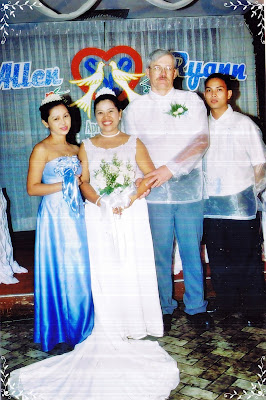 After a few months of their online dating,  Allen (her husband) and Ate Connie decided to get married here. I was the maid of honor while my hubby was the best man of their wedding. I could really feel how happy she was when she finally found someone who really loves her for who she is and the best thing also is that Allen accept her kids and treat them as his real kids too. 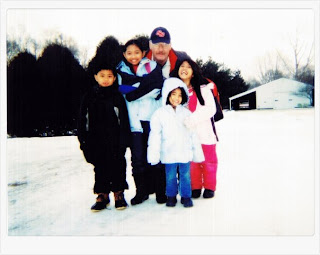 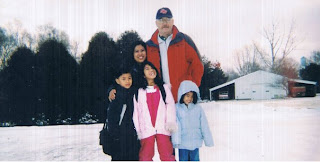 And after a few months of waiting for the process of their papers, finally they had able to go and live together in the U.S. as a one big happy family. Can you just imagine how God showered them with so much blessings? It is not easy to do it since it needs a lot of money to process all their papers. Allen is just so kind to them and he dearly loves Ate Connie as well as her children.
I also want to share to you her life story when she and her family was featured in Tonic.com a few days ago.

LIFE IN AMERICA: A Mother of Four Works Three Jobs to Support Church and Family

By John R. Platt | Tuesday, June 29, 2010 8:30 AM ET
Ryann Feddersen works hard to support her family in Iowa and the church her late mother founded in the Philippines. Tonic readers: Here's your chance to give a little back to one hard-working mom.

**EDITOR'S NOTE: Back in March, after Tonic presented a $30,000 scholarship to Constance McMillen on Ellen DeGeneres' talk show, we received a heartfelt letter from a 12-year-old girl named Tresha who was hoping we might be able to do something to help her mom, too. Well, this is her mom's story. It's a story typical of many in America — the kind of story that is often overlooked by big media; and a story that we hope will move you to want to fulfill Tresha's humble request. At the bottom of this page, Tonic is providing a link to a Paypal account that we've set up especially for the Feddersens. We're not a nonprofit, and your donations will not be tax deductible. But if you're so inclined, why not give what you can? Any amount will do. And whatever money we raise will be handed over to Tresha's mom — a woman who's working hard to do her best, not only for her own kids, but for others, too. It's sort of like neighbors helping neighbors. We're just doing it online, and proving that in this day and age, it's possible to be neighborly no matter where you live.
According to the US Census Bureau, 55 percent of American mothers now work outside the home. But that's just a number; the reality is embodied by women like Ryann Feddersen of Cedar Rapids, Iowa. This mother of four works three jobs, two of which are full-time, to support not only her family, but also so she can keep giving back to the church her late mother founded in the Philippines.
"I don't just love to work, I love to work a lot," Feddersen says. "I have lots of people I could help. I have a commitment to keep helping. As long as I can help, I will."
The truth is, Feddersen recently had to slow down, just a little bit. Pain in her back led to a diagnosis of Scoliosis, forcing her to quit her third full-time job, even though her family could use the money, because she could not continue to work standing up. But that doesn't deter her: "My heart tells me we need to help others, because we know what it is like to not have food on the table."
The Family that Works Together, Stays Together
Feddersen and her son and three daughters moved from the Philippines to Iowa four years ago. At the time, she was a single mother, and she says the move was tough on her kids. "We live in a very small town, just 700 people," says Feddersen. "We came from a very big city in the Philippines. We experienced racial discrimination here. But I told my children, 'forgive and forget.' As long as you do well in school, someday these kids will be your good friends. And it happened. I taught them to be a good citizen wherever you are."
Feddersen recently married a man equally as hard working as herself. "He works 12 to 16 hours a day as a machine operator," she says. "I'm very lucky to have found him. The two of us work really hard. I consider myself blessed, having this family."
It was Feddersen's second daughter, 12-year-old Tresha, who first brought her mom to our attention here at Tonic. "My mom works so hard," Tresha told us, "but we know she works for us."
Tresha and her brother and sisters (Jhesh, 14; Josh, 10; and Nicole, 8) do as much as they can to help their mother. "We help out a lot around the house by cleaning and doing chores when she's really tired," Tresha says. "We see how our parents work really hard. We want to pay them back and help."
Ryann's voice breaks when talking about her daughter's hard work and compassion. "Tresha really touched me, because she wants to help," she says. "It's tough as a single mom. You work so hard, and then you see them growing up. I see them with their gifts and their giving, and I know that my hard work as a mom is not a waste."

A Family's Legacy
One of the reasons Feddersen works so hard is so she can support the Into the Hands of God church her mother founded in the Philippines 17 years ago. "The church is a legacy from my mom," she says. "She entrusted us [with it]."
Feddersen's mother died last October after a brief illness. "As she got sick, mom focused on her medical bills and medications," says Feddersen. "We could not maintain the mortgage, and the bank took the building back."
The church is now an outdoor structure with a nipa (thatched) roof and no walls, but it still supports a large community of people around it. It might not have survived without Feddersen's help. "I'm the oldest child in my family, so it's my responsibility," she says. "I need to shoulder everything with my husband. I'm lucky, he tells me to just keep going and helping."
Feddersen recently helped to purchase a new set of musical instruments for the church. She will also be helping to pay for tuition and books for ten children starting the school year this summer. "The people, they inspire me," she says. "No matter if there's a big building or no building, they still find it in their hearts to worship."
Meanwhile, Feddersen's two brothers also depend on her support. "One of my brothers is in charge of the music ministry," she says. "He teaches the kids, and he also helps the blind women who need to be picked up and taken to church each week and fed," she says.
Her other brother will succeed her mother as the church's minister. He is currently a full-time seminary student, an education made possible by his sister's giving heart.
"I know I have four kids to take care of here, but I do what I can to help [my family back in the Philippines]," she says.
Lessons from Giving
Daughter Tresha says she has learned quite a bit from her mother's good example. "I would tell other kids to get their heads up, try to explore and help out a little."
Despite her back pain, Feddersen continues to work and to pray for a better future, and encourages everyone she meets to do the same. "You need to be out there," she says. "Share your story with other people. Don't be ashamed, tell the truth. People will be inspired. The truth will always prevail."
meme my family nostalgia