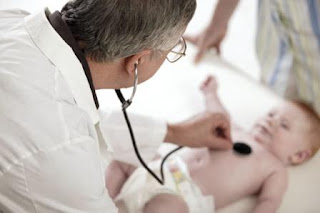 My cousin's 8 months old baby was confined twice at The Makati Medical Center for several days due to viral infections.It's just too sad to know she had been admitted twice due to the on and off sickness where she had a blood on her poo-poo while she's having a diarrhea and she also vomit often times.Good thing the baby is now okay.
I asked my cousin what's the cause of this viral infections, she said that the bacteria entered her body through the mucous membranes like the nasal passages, mouth, genital area, rectum and skin that has been cut or irritated such as diaper rash.
In preventing this infections, whether bacterial or viral, Hand washing is No. 1 on the list of good preventive habits: before and after changing diapers, after hands are visibly soiled, after handling dirty tissues, wiping runny noses and when returning home from work or crowded public areas. Parents should also encourage any childcare provider to use these measures to prevent transfer of infections to the infant. When siblings have infections, parents should encourage normal contact with the sibling and discourage kissing the infant on the face and should discourage sharing of pacifiers or sippy cups.
Parents should need to remember that the differences between bacterial and viral infections can be subtle and should always be referred to a trusted health professional for examination and determination of the type and proper treatment.
baby health kids website