August 10, 2010
My hubby is suffering from Gastroesophageal reflux disease or (GERD). It is a condition in which the esophagus becomes irritated or inflamed because of acid backing up from the stomach. The esophagus or food pipe is the tube stretching from the throat to the stomach. When food is swallowed, it travels down to the esophagus. 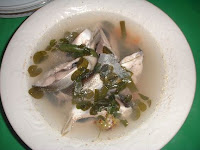 His doctor advised him to avoid eating fried and fatty foods so as of now he is only allowed to eat soups and porridge. He is not allowed to eat meat  so he seems like a vegetarian this time. His usual food is tinolang isda and tahong, ginataang munggo and langka. I actually find it hard in cooking for some soup recipes for him. Any simple recipes you could share to me where there is no meat and no oil involved in it?
Your help is highly appreciated. Thanks so much!
food health recipes