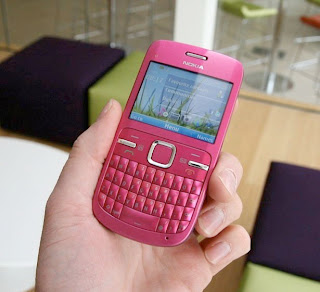 I was at the shopping mall yesterday when I saw this Hot pink phone, the Nokia C3 that looks like a Blackberry. I fell in love with its eye catching color since I love pink and fuchsia shades and most of my phones I'm using is in pink color. Like most of the latest cell phones launched by the leading brands, the Nokia C3  is also focused on social networking and messaging features and has an Instant Messaging capability and access to social networks.
The Nokia C3 is the first device to bring a full QWERTY keyboard to the world's most popular mobile phone operating system which is the Symbian Series 40. The device is also the first in the range to enable access to social networks directly from the home screen where you can view, comment, update your status and share pictures to your favorite social networks such as Facebook and Twitter.
Nokia C3 also comes with Ovi Mail and Ovi Chat, which means that first time users can set up email and chat accounts straight from the handset, without the need for a PC. Other notable features are the Wi-Fi connectivity, a 2 megapixel camera, 2.4 inch screen and support for up 8GB memory card.
Moreover, the Nokia C3 phone is quite inexpensive as compared to the other phones available in the market which has the same configuration and functionalities. This eventually put  Nokia C3 in the elite group of phones which user can buy without thinking about the budget.
mobile phone mobile phone review pink mobile phones