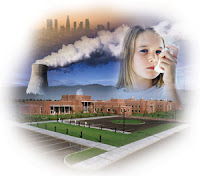 Environmentalists have long lobbied to take the necessary steps to limit or eradicate air pollution in our society. And they have good reason for their efforts; while many Americans may not see pollution as a threat to their health or everyday lives, it’s the cause of many health problems or diseases.

Air pollution is the contamination of the air by chemicals, biological materials, or particulate matter. Air pollutants can come from natural causes, such as a volcanic eruption that emits ash. However, pollutants from man-made sources are much more common, including the carbon monoxide gas from a vehicle’s exhaust or sulfur dioxide emanating from factories.

Although not directly caused by pollution, asthma is significantly worsened by high levels of pollutants. Sulfur dioxide, for instance, can cause constriction of airways in the lungs. This constriction makes it more difficult to breathe and can trigger a dangerous asthma attack. Asthma attacks set off by pollutants primarily cause deaths that result from air pollution.

Long-term exposure to lung irritants can cause chronic obstructive pulmonary disease (COPD). Cigarette smoke most commonly causes the disease, but air pollution and chemical fumes or dust may also cause COPD.

COPD is a progressive illness in which patients have difficulty breathing as a result of constricted airways or damaged lungs. COPD symptoms include a painful cough that produces mucus, shortness of breath, chest tightness, and wheezing. These patients often have low levels of oxygen and need to employ a pulse oximeter to continuously check the levels of oxygen in their blood. Symptoms of COPD tend to worsen over time.
Air pollution can be the cause of many other diseases; doctors have linked it to everything from cystic fibrosis and lung cancer to strokes. The American Heart Association listed air pollution as a major public problem and a threat to all Americans. Because of this, all Americans--not just environmentalists--may want to consider air quality.
community environment health society