If Only I Have a Perfect Digital Camera

September 19, 2010
I actually have three digital cameras here, but you know what? they're all having some problems and defects. I have a Canon Powershot but it accidentally fell into the water that's why it doesn't have a flash anymore and it takes some blurry shots. However, I can still take some nice pictures during daytime and if I just took a steady shot on scenery. I also have a Benq digicam but it was also dropped in seawater that's why it has some white lines appearing on each photos. And lastly, I have this cheap unbranded digicam that can also record a video but it doesn't have a flash and it has a less megapixel so it doesn't take a good photo. You can see the example shot from my cousin's wedding below. 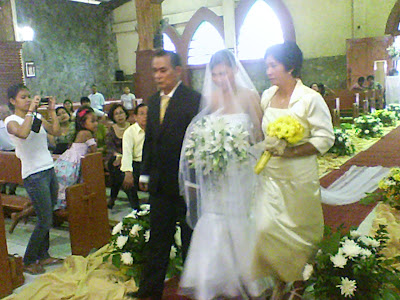 If only I have a perfect digital camera then I could capture great photos and I would not miss any single moment just like my cousin's wedding. I really wanted to capture them when they kissed each other but too bad It was not a good shot that's why I just deleted it. It would be better if I could buy the Best DLSR Camera so I can capture better image quality in my pictures. I also need to consider the price that could fit my budget and also the tech specs of the camera. I hope I can find one here in our shopping mall.
family gadget love marriage Wedding