Hidden Gold Treasures in The Philippines, Does it Still Exist?

January 13, 2011
(I was looking for some paid opps today when I saw a task that talks about buying gold online. Then the word "gold" suddenly pops up in my mind, so here I am sharing my nostalgic story of my uncle's "Indiana Jones"este treasure hunting experience) ^_^
Did you know that until today there are still many people who are digging out looking for the hidden gold treasures which was said to be found here in the remote areas and mountainous place in the island of Mindanao? Two of our common friend are actually involved in finding and digging gold treasures right now. We may not know it, but there are literally billions of gold, statues and other Asian looted treasures buried in hundreds of secret locations all throughout the country.
My family and relatives was actually involved on that digging and treasure hunting thingy before. I remember way back during my childhood days, when my uncle who is a treasure hunter used to live with us, I learned a lot from him about  all those hidden treasures of Yamashita before and during World War II who still have millions of tons in gold and huge amounts of jewels secured in deep dangerous conditions. 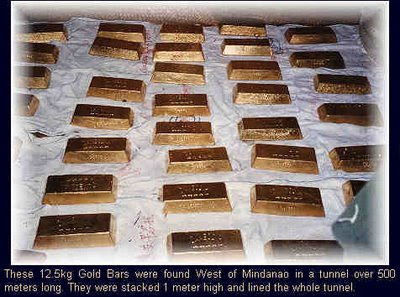 According to the article I read online, the Yamashita or the Tiger's Gold has an estimated total worth of three billion 1940's dollars which has an equivalent of over $100 billion today. Now If you're wondering why the Japanese themselves haven't gone back to the Philippines to try and secretly recover some of this hidden treasures, well the truth is,  they certainly did, but they only got a very small percentage of what was actually buried. Ex-president Ferdinand Marcos himself actually  managed to recover several sites with the  help and assistance of some ex-Japanese soldiers that is why he became so wealthy.


It's just too bad that my uncle wasn't able to find those real gold treasures because he himself was being scammed by those native people who are claiming that they have known the place where the treasure was buried. However,  he was able to find some antiques, vintage items, artifacts and other rare collectibles out from his treasure hunting adventure.  He and his digging team was able to recover several chests of (Japanese Yen) Kobe Sauna notes and coins. I have seen them in my own eyes along with all those rare items  remained during the war. My uncle was able to sold these items which serves as collectibles from the buyer who bought it at around half a million pesos at that time.

I do believe about Yamashita's buried gold deposits here in our country. But if you ask me if we can still find those gold bars now adays? I don't think so. I think Marcos already took it all. lol! And if there is, I just hope that its not a scam after all.