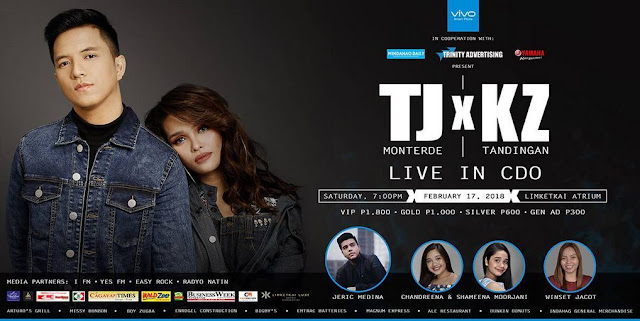 Real Life lovers KZ Tandingan and TJ Monterde will be spreading more love even after February 14 in Cagayan De Oro for a special post Valentine concert at the Limketkai Atrium. Scheduled on February 17 at 7:00 pm, KZ and TJ will be joined by other talented artists like X Factor alumni Jeric Medina, Chadreena and Shameena Moorjani, and upcoming Visayan singer Winset Jacot.

Brought together by their passion for music, TJ and KZ have been a couple for three years now (and counting!) and first met through common friend veteran music icon Martin Nievera. They are best known for their song Ïkaw at Ako Pa Rin”, a “hugot”song about long distance relationship which defies hardships and conflicts. The song’s music video went viral.

In support of KZ and TJ, Vivo will serve as the co-sponsors of the real-life couple’s upcoming post-Valentine concert at Cagayan De Oro.

and also KZ’s recent performance in a Chinese series The Singer 2018 where she beat her idol Jessie J with her powerful rendition of Adele’s Rolling in the Deep.
CDO concert concert CDO KZ & TJ concert